Four construction sites are currently in operation, two in Austria and two in Italy. You can see the details of the construction lots by clicking on our interactive route plan. The excavation progress reports of the individual tunnel structures in the various construction lots are updated weekly. Work progress is shown on a graph.

This construction lot, worth 380 million Euro, was awarded to the Strabag/Salini-Impregilo bidding consortium in Summer of 2014. Excavation work began in September 2014. About 43 km of tunnel are excavated.

It consists of several structures:

The emergency tunnel was being driven parallel to the existing Innsbruck railway bypass. It is 9.7 km long and the excavation cross-section is 35 m². The drill-and-blast excavation work on this tunnel started from three points at the same time: from Tulfes westwards, from the Ampass access tunnel eastwards and again westwards. The emergency tunnel was completed in Summer of 2017.

The main tubes have been excavated by blasting according to the so-called New Austrian Tunnel Construction Method. The ceremonial first volley was set off on 19/03/2015 in the presence of EU Commissar Violeta Bulc and the Ministers of Transportation of the 7 Alpine countries (Austria, Italy, Germany, Switzerland, France, Liechtenstein and Slovenia. This stretch includes about 6 km of main tunnels with an excavated cross-section of about 70 m2 .

Connecting tunnel between the BBT and the Innsbruck bypass

The connecting tunnels were also excavated by blasting, with a cross-section of about 115 m2. Excavation work was completed in Spring of 2017.

The construction lot includes the construction of the 16.5-km stretch of exploratory tunnel between the Ahrental junction point and the town of Steinach. Since its start of operations on September 26th 2015, it has moved southwards excavating 16,7 km until July 6th, 2020.

The “Pfons-Brenner” construction lot H51 is the biggest and at the same time the southernmost stretch of the Brenner Base Tunnel in the Austrian project area. Around 52 kilometres of tunnels will be excavated as part of this construction lot. The project area extends from the township of Pfons to the border at the Brenner Pass.

The work on this construction lot began in late autumn of 2018. Construction is expected to last 74 months. The contract amount is about 966 million Euro. The joint venture comprising the Austrian construction groups PORR Bau GmbH and G. Hinteregger & Söhne Baugesellschaft m.b.H., the Italian construction groups Società Italiana per Condotte d’Acqua S.p.A. and Itinera S.p.A. is responsible for the tunnel section.

In this construction lot, 37 km of main tubes will be excavated. Several tunnel boring machines (TBMs) will excavate the main tunnel tubes.
Assembly of the machine will take place in large chambers. The TBMs are moved forward in the start tunnels after assembly and start driving from there. The other stretches will be built by blasting.

European safety standards provide for emergency stops at a maximum distance of 20 kilometres for tunnel structures, such as the Brenner Base tunnel. A total of three emergency stops are planned in the BBT. 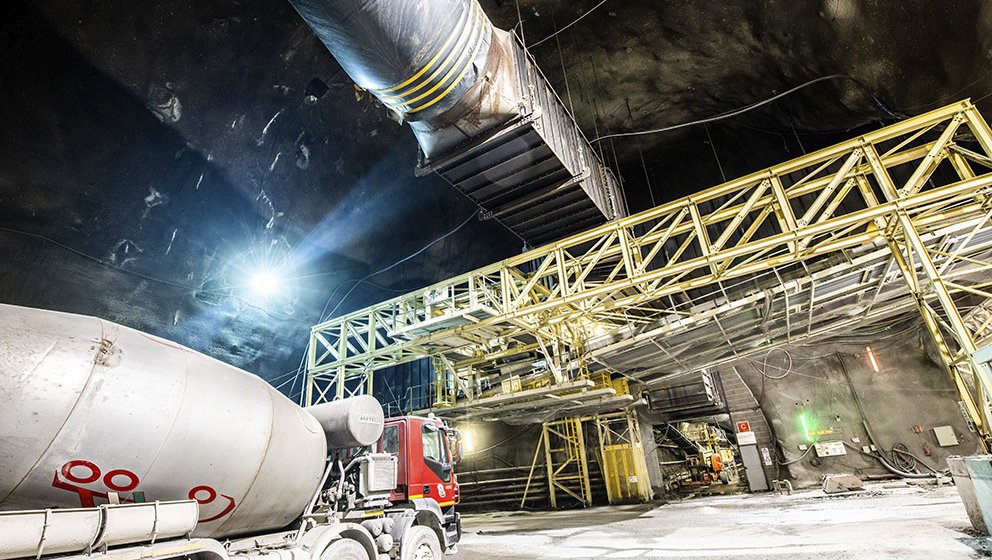 The construction lot “Periadriatic seam”, carried out between October 2011 and the summer of 2015, comprised the excavation of 3.7 km of the main tubes and 1.5 km of the exploratory tunnel. The crossing of the Periadriatic fault line, one of the biggest geological fault lines in the Alps, was accomplished without a hitch.

This lot reaches from the construction lot “Isarco river underpass” up to the State border with Austria. In the course of a 7-year construction period, 39,8 km of the main tubes and 14.8 km of the exploratory tunnel will be excavated, including the emergency stop in Trens and its access tunnel as well as the bypasses which connect the main tubes every 333 m. A total of approximately 65 kilometers of tunnels will be excavated.

Once this construction lot is finished, all excavation activities in the Italian project area will be complete.

Main tunnels
The drift of the main tubes northwards resumed on the 13th of march 2017. The excavation for the first 0.8 km was carried out by drill and blast, followed by two tunnel boring machines heading north in spring 2019. The TBM in the west tunnel will probably reach the state border at the end of 2021, the TBM in the east tunnel will arrive at the Brenner slightly later, at the beginning of 2022.
The first blast of the southwards drift took place on the 3rd of april 2017. The southern end of the construction lot is expected to be reached in mid-2020.

The southernmost construction lot of the Brenner Base Tunnel, worth 301 million Euro, was awarded to the bidding consortium Isarco s.c.a.r.l. composed of Webuild S.p.A. (formerlySalini-Impregilo), Strabag AG, Strabag S.p.A., Consorzio Integra and Collini Lavori S.p.A. bidding consortium in October of 2014. This lot links the Brenner Base Tunnel with the existing Brenner line and the railway station in Fortezza. The work is scheduled to be completed in 2022.

Since in this section the tunnel tubes are just a few meters below the surface, a portion of the activities pertaining to this construction lot is be carried out building artificial tunnels. Furthermore, as loose fluvioglacial materials and the groundwater layer will be crossed, it is be necessary to adopt specific ground consolidation procedures including ground freezing and the so-called jet grouting.

As part of the preparatory work, by the end of 2016 the state road SS12 was re-routed and two bridges, an underpass under the Brenner railway line and a direct highway access were built. This means that both supply and removal transports can take place while avoiding traffic through the surrounding towns.

The current phase (main construction phase ) provided for the construction of four shafts, 20-25 metres deep, to access the rock faces of the Isarco River Underpass. Furthermore, it includes the excavation - already completed - of the access tunnel on the right side of the valley using drill and blast, and of part of the main tubes and the connecting tunnels, to be built with the drill and blast method.

As a preparatory measure for the relocation of the existing line, slope stabilization and earthmoving measures are being  implemented.