The Brenner Base Tunnel: a connecting project

The CEOs and all BBT SE personnel came together for a company plenary event at the Hapsburg Fortress in Fortezza.

The two CEOs, Gilberto Cardola and Martin Gradnitzer, talked to the company’s employees about the company's future and the next steps to be taken in the Brenner Base Tunnel project.

Cardola and Gradnitzer described the work to be done next year, such as the upcoming excavation under the Isarco river (Fortezza) and the start of construction in the Sill gorge (Innsbruck), emphasizing the importance of the leitmotiv of the Brenner Base Tunnel:

This means reinforcing cross-border cooperation and exchanges of ideas and knowledge, and developing a mutual awareness of the work being done on both sides of the border.

The changes to the company statute and the internal rules for the Board of Directors which were introduced at the plenary meeting are completely in line with this approach.

During the meeting, presentations were held on the progress of the works on the four active construction lots and the ISO recertification of BBT SE.

The various topics discussed included the most recent quarterly reports and the budget forecasts for 2020.

Gilberto Cardola and Martin Gradnitzer have made recent joint visits to the four construction lots in Tyrol and Alto Adige.

In Austria, they visited the construction site in Ahrental where the civil engineering works have already been completed and the Wolf construction lot where five separate drill-and-blast excavations are ongoing.

In Italy, the visited the construction site in Mules with its six separate excavation fronts, three of which using TBMs, and the Isarco River Underpass site. They also visited the disposal sites.

The two CEOs are clearly signalling their approach to handling future challenges:

By joining forces, the works on the greatest European infrastructure project will move forward at speed. 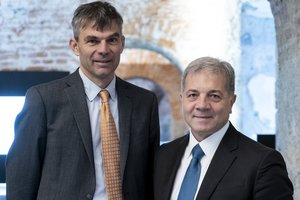