The Brenner Base Tunnel company has new leadership

Starting on September 18th, 2019, two well-known rail experts, Martin Gradnitzer and Gilberto Cardola will take the helm of the Brenner Base Tunnel cross-border project company, thus ensuring the highest level of competence and continuity for the most important European transport infrastructure project.

(Vienna, Rome 17.09.2019) – The Brenner Base Tunnel (BBT) is one of the most important construction projects today. The longest underground railway connection in the world, which will seamlessly link the regions to the north and the south of the Brenner Pass, will become the main element of the new Brenner railway line between Munich and Verona. The Brenner Base Tunnel is also one of the most important environmental protection projects in Europe, because it will not be possible to achieve climate protection goals without railway transport. A ton of freight hauled by rail produces 21 times less CO2 than one hauled by road - and if the price is right, railway transport will boom.

Enormously important for Europe
The Brenner Base Tunnel is also extremely attractive in terms of trans-alpine freight traffic. The project is enormously important for the entire European economy. Just how significant this tunnel is for people along the Brenner corridor in Italy and Austria is shown by this impressive and very worrisome number: almost 2.5 million lorries crossed over the Brenner Pass last year, meaning more than over the Alpine passes in Switzerland and France combined.

The project is moving ahead with new strength and momentum
The BBT will benefit may future generations and it is a good investment. Italy, Austria and Europe are driving forward this enormous project with professionalism, stability and continuity - for the project, the people that have been working on it for so many years, the neighbouring populations and, of course, in the interest of the taxpayers. The Supervisory Board of  BBT SE is delighted that the two new CEOs, Gilberto Cardola and Martin Gradnitzer (ad interim until a formal appointment is made) will carry the project forward with new momentum. We have completed the excavation of almost half of the 230 km in the tunnel system, including exploratory and rescue tunnels; works are proceeding apace and we are solving the most difficult geological problems in tunnelling below the Alps. In 2028, the first trains should travel through the longest railway connection in the world and provide Tyrol with lasting relief from the current hordes of lorries.

The flagship of the European TEN-T projects
Much has been achieved since 2006, the year when Austria, Italy and the EU started this project together. For this we must also thank the outgoing CEOs, Konrad Bergmeister and Raffaele Zurlo, who deserve the gratitude of ÖBB, RFI, Austria and Italy. Both CEOs succeeded in driving forward the tender procedures and works to the north and south of the Brenner and in making this into a flagship project among the European transit corridors - the Brenner Base Tunnel is the No. 1 project in the Trans-European Transport Network (TEN-T). The Brenner Base Tunnel project is at a good point. Based on current knowledge and regular external verification procedures, all the construction lots are within the cost frameworks approved by the Supervisory Board. The two new CEOs, Martin Gradnitzer and Gilberto Cardola, are well-known experts in the Austrian and Italian railway companies. Their mandate will begin directly on September 18th 2019, to drive forward this cross-border project together and with a European spirit.

A joint task for Europe
Europe’s common task now will be to devote even more effort to creating the necessary framework conditions to make the best use of the full potential of the tunnel for the environment, the economy and the local populations. The management of the traffic flows from Germany and Italy are essential to properly bring to fruition one of the most important projects in Europe. 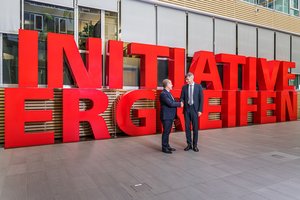 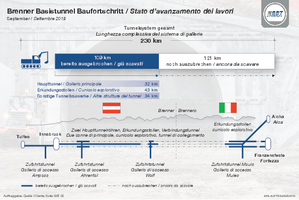