The last large component of the TBM “Flavia” has arrived at the Mules construction site. A short video shows the long journey that began in Germany on the Rhine and, after passing through Gibraltar and Marghera, ended in Mules.

The transport involved a very bulky and heavy piece of machinery: the head of the TBM (the so-called "maindrive"), which weighs 147.50 tons and has a diameter of 10,71 m and, for these reasons, was transported first by sea and then by land.

It all started on 30 January 2018, at the Herrenknecht plant in Schwanau (Baden-Württemberg, Germany); the maindrive started its journey on the Rhine river and then reached Antwerp. Two weeks later, the journey continued by sea via Gibraltar to Marghera, where FLAVIA arrived on 20 February 2018. From there, the journey continued by road towards the BBT construction site in Mules. Given the size and weight of this TBM component, the last part of the journey lasted two weeks and was carried out in several stages during the night, interrupting other traffic where necessary. The special transport covered 120 km from Marghera to Verona and then, driving on the A22, another 230 km to Bressanone. The transport from the motorway exit to the Mules construction site along the SS12 was also a real challenge: in particular moving through the town of Fortezza, where the road narrows just before a curve, required the uttermost precision and delicacy. 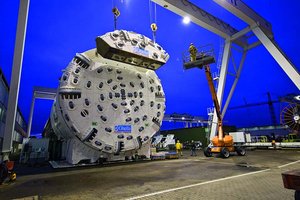