A new steel bridge re-opens the panoramic trail to walkers

On Friday, September 7th, 2018, the circular walking path in the Padaster Valley war officially re-opened by the municipality of Steinach.  The mayor of Steinach Mr. Josef Hautz, Mr. Erich Raffl, TVB chairman Mr. Kurt Hasenbacher and BBT SE CEO Prof. Konrad Bergmeister expressed their satisfaction that the beloved walking path now can be used again by tourists and by the local population.

“I am delighted to re-open this beautiful walking path to tourists and to our local population.  Besides relaxing, walkers have the chance to witness the Brenner Base Tunnel construction works and the works on Europe’s largest spoil disposal site."

“Roads are a meeting point for people - new transport routes connect cultures, people and folks in Europe.  The circular walking path in the Padaster Valley is an example of transparent construction culture, since visitors can witness the realisation of the world’s longest tunnel."

The path can be seen as symbol for the development of the project: like the path, which is not straight, the history of the project has also been marked by lots of difficulties.  At the end, there is a marvellous view of the Wipptal. Let’s hope that after the start of BBT operations, the Wipptal will be increasingly free from heavy freight traffic.

In 2016, BBT SE created a walking path around the disposal. Parts of the path are equipped with steel steps and belvedere platforms. In the past year, severe thunderstorms did considerable damage to a part of the trail.  Landslides uncovered naked rock, and only half of the path remained accessible.  The terrain is rather unapproachable here.  The renovation turned out to be difficult and took some time.  BBT SE and the municipality of Steinach decided to build the new pedestrian bridge.  The renovation of the path and the construction of the new steel bridge lasted until the end of August, 2018.  The cost amounted to about € 200,000.- .

A heavy freight helicopter brought the two pieces of the steel balustrade to the installation point where they were set on pre-installed concrete bases.  The bridge is 32 meters long and has a weight of about 7 tons.  Because of the weight, the helicopter had to make two flights.

The 5.4 km path starts at the hydroelectric power plant and runs along the sunny side of the valley.  It runs through a 500-m underground water pipe that is lit up when one walks through it.

At the exit of the tunnel, the path crosses the Padaster brook and leads to the other side of the valley, back to the chapel of St. Wendelin at the opening of the valley. It takes about 2 hours to walk around the loop (a 650 m difference in altitude, with various ups and downs). The trail is closed in the snow and ice season and is accessible again in the Spring. 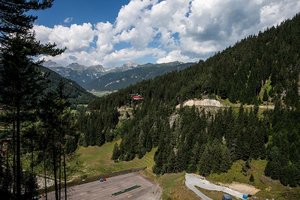