Breakthrough in the last main tunnel under the Isarco river

About a month after the start of the works, the excavation works broke through today in the last main tunnel being built under the Isarco river for the future passage of rail traffic through the Brenner Base Tunnel.

Since 2020, four tunnel stretches have been constructed under the Isarco river.
Excavation below the river was only made possible by freezing the soil with liquid nitrogen and then maintaining low temperatures by circulating brine.

The ground freezing technique creates a frozen shell around the tunnel perimeter, which allows safe excavation works to take place below the river without having to re-route the riverbed, which intersects the route of the Brenner Base Tunnel. This reduces the environmental impact on the fish in the river and on the flora in the areas involves in the construction of the infrastructure. Careful use of natural resources is a key element in the planning and construction of the tunnel. Today's breakthrough is a further important step toward joining the Isarco River Underpass and the Mules 2-3 construction lots and, in general, in the construction of the Brenner Base Tunnel.

Alessandro Marottoli, Director of Proceedings for BBT SE for the Isarco River Underpass building site, expressed his satisfaction by saying: "Today we have added another important piece to this momentous work, thanks to the excellent cooperation between BBT SE, the Contractor and the Construction Management team. We will continue working to build the BBT according to the goals that we have set for ourselves, both for environmental sustainability and the future of European mobility." 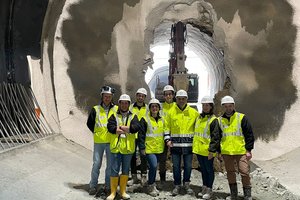