BBT: BREAKTHROUGH AT THE SOUTH PORTAL OF THE BRENNER BASE TUNNEL

04.12.2018 Fortezza/Bolzano – The breakthrough to the southern Brenner Base Tunnel took place yesterday, only a few hundred metres from the station in Fortezza. On St. Barbara’s Day, over 400 people, including miners technicians and representatives of the authorities were present on the construction site in Fortezza to watch this special event.

Besides RFI Chairperson Claudia Cattani, RFI CEO Maurizio Gentile, the Governor of the Autonomous Province of Bolzano  Arno Kompatscher, the INEA Director Dirk Beckers and the Mayor of Fortezza, Thomas Klapfer were also present at the ceremony for the breakthrough. The former Governor  Luis Durnwalder ad the President of the FS Foundation Mauro Moretti, who have done so much for the project, were present at the symbolic breakthrough.

BBT SE CEO Raffaele Zurlo was very pleased at reaching this important milestone in the construction of the BBT. “We have excavated 93 kilometres of the total 230 kilometres in the BBT system. Of course there is much work left to do to finish construction. But the tunnel is taking shape: starting today, all the travellers at the station in Fortezza will be able to see for themselves the southern entrance to the Brenner Base Tunnel.  The tunnel will be visible and will be more real to people.”

Governor Arno Kompatscher emphasized the importance of the Brenner Base Tunnel. “This is the project of the century and thanks to the tunnel it will be possible to shift heavy traffic from road to rail and thereby reduce both air and noise pollution.”

„The Brenner Base Tunnel”, said Maurizio Gentile, “is the most important project, at present, along the stretch of the Scan-Med Corridor in Italy.” It is a very challenging project and once it is operational, it will lead to a significant increase in the shift ogf heavy traffic from road to rail. Thanks to the tunnel and the new link to Central Europe, Italy’s ports will have a new lease on life and Italy’s economic system will become more efficient and productive.”

Dirk Beckers spoke of the vision of a modern Europe in the 21st century, where all the regions on the continent are efficiently linked together. The BBT is, therefore a strategic project and that is why the European Commission is supporting the construction of the tunnel to the tune of over 1.5 billion Euro.

After the Mass said by the priest of the parish of Fortezza, Father Oswald Holzer and accompanied by the male choir of Novacella, RFI Chairperson Claudia Cattani accepted the role of godmother to this tunnel and gave the signal for the breakthrough.

Walking through the newly created portal, the miners brought the banners of the construction companies, the Italian and Austrian flags and - to the strains of Beethoven’s Ninth - the flag of Europe as a symbol for the European importance of this project.

To round off the event, the statue of St. Barbara was brought through the portal and set in a special niche next to it. 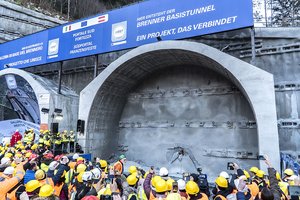 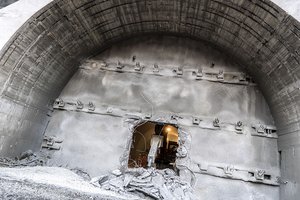 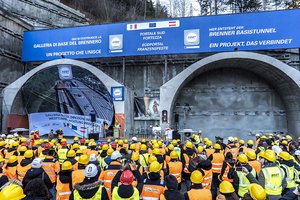