Work has begun on the largest construction lot of the Brenner Base Tunnel project: “Mules 2-3”

The huge construction lot includes 68 km of tunnels, for a total value of about 1 billion Euro. The contract was awarded to the consortium that includes Astaldi S.p.A, Ghella S.p.A., Oberosler Cav Pietro, Cogeis S.p.A., PAC S.p.A. The lot known as “Mules 2-3” makes up the main part of the route of the Brenner Base Tunnel in Italy and includes the stretch from Mezzaselva (BZ) to the border with Austria.

The excavations, to last 7 years, will include 40.3 km of main tunnels, 14.7 km of exploratory tunnel, the emergency stop in Trens with its access tunnel and the cross passages located every 333 m between the main tunnels, thus completing all the excavation work planned in the Italian part of the project.

The first part of the excavation toward Brenner will be carried out using the drill and blast method to complete the crossing of the Periadriatic Line, after which work will proceed to the border using a TBM (tunnel boring machine); the excavation work southwards on the main tunnels will also be carried out by TBM, up to the border of the other lot currently under construction, the Isarco River Underpass.

Over 6 million cubic metres of spoil will be removed during the work on the Mules 2-3 construction lot; about a third of this material will be recycled  within the construction site itself as aggregate for the production of concrete.

The spoil will mainly be transported on conveyor belts, thus reducing the impact on ordinary traffic.

On October 23rd, 2016, the Mules construction site will once again host the Open Tunnel Day event, when visitors will have the chance to see the works up close for themselves. Besides tours of the construction site, there will be many other attractions, such as games for children and a refreshment stand. 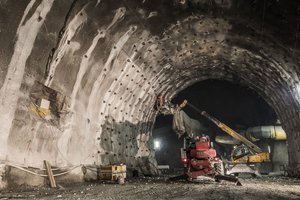 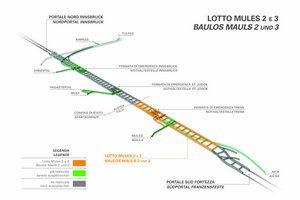