After the approval of the updated construction programme, on September 7th, 2021 approval was also obtained for the total costs of the project, which had been updated to take the following issues into account:

Base costs for the realization of the work
The base costs include the costs of construction both below and above ground, railway outfitting costs and administrative costs.

The updated base costs for the realization of the work based on 2021 prices amount to 7.7 billion EUR.
In order to obtain the costs over the life of the project, the cost components linked to unknowns (risks) and estimated monetary adjustment must be added, in compliance with the differing laws and guidelines in Italy and Austria.

In 2017, the total costs over the life of the project calculated according to the Italian system amounted to 8.384 billion EUR

In Austria, in order to calculate the costs over the life of the Project with an eye to obtaining financing, both the base costs and the costs associated with risk prevention (identifiable and non-identifiable risks) are taken into consideration, according to the guidelines set forth in Austrian law. A standard coefficient of 2.5% is applied to calculate the estimated monetary adjustment. Costs over the life of the project 2021 (Austria): 9.567 billion EUR

In 2017, the total costs over the life of the project calculated according to the Austrian system amounted to 9.301 billion EUR

"The differences in the calculation methods are an example of the complex challenges that we must face in this cross-border project", remarked the two members of the Board of Directors of BBT SE, Martin Gradnitzer and Gilberto Cardola.

EU financing is ongoing
The agencies of the European Union which provide funding have been involved from the start in the decision-making and implementation processes of the project and have confirmed, over the past few days, the Eu's absolute strategic and financial support for the project up to its completion. In order to cover the financial commitments that have already been undertaken, Italy and Austria currently receive co-financing from the European Union for 50 % of the planning and prospection activities and for 40% of the construction activities.On July 28th 2021, based on the new construction programme and the update of the total costs for the realization of the project, the European Climate, Infrastructure and Environment Executive Agency - CINEA - signed the extension to 2023 of the eligibility period for the funds that had already been assigned to the project. BBT SE will also take part in the upcoming Calls to obtain European Co-Financing for the periods after 2023.

Status of the Works
The Brenner Base Tunnel is actually a tunnel system made up of a total of about 230 km of tunnels. So far about 144 km of tunnels have been excavated. 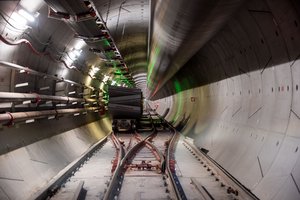