The TBM known as “Flavia” is on its way

Shortly after 1 PM, at the Mules construction site for the Brenner Base Tunnel, the first of the two large tunnel boring machines that will drive the main tunnel towards the Brenner Pass was started.

The cutter head began to turn, as Raffaele Zurlo, Italian CEO of BBT SE, looked on. With him were the heads of the BTC (Brenner Tunnel Construction) consortium, which is carrying out the works, and the engineers, technicians and miners whose speciality is tunnel boring machine (TBM) excavation. The TBM, which is named Flavia, has begun cutting through the rock.

The machine is 200 m long and weighs 2,750 tons; it takes 4,200 kW (5,700 HP) to drive it through the depths of the mountain. Flavia will drive the west main tunnel using the experience gained by the excavation of the exploratory tunnel which was carried out by another machine, named Serena. Serena began work in May of 2018 and has already driven over 4 km of exploratory tunnel.

As Flavia begins her work, the last tunnel boring machine, named Virginia, is being assembled in the neighbouring east main tunnel. Virginia is a twin to Flavia and will start work at the end of May. 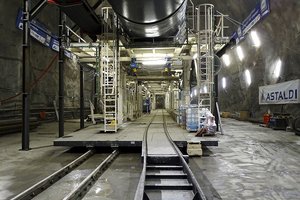 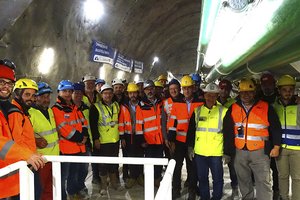