Start of excavations in the BBT lot "H41 Sill Gorge-Pfons”

In Ahrental, near Innsbruck, the start of excavation work on the main tunnel tubes was celebrated today in the BBT construction lot H41 "Sill Gorge-Pfons". The starting volley took place in the presence of Austrian Federal Minister Leonore Gewessler as tunnel patroness. The ceremony was attended by numerous stakeholders of the BBT project, including the governor of Land Tyrol Günther Platter, the governor of the Autonomous Province of Bolzano Arno Kompatscher, the President of the Province of Verona Manuel Scalzotto, the CEO of ÖBB Infrastruktur AG Judith Engel and the Italian member of the Board of Management of BBT SE Gilberto Cardola. After the ceremonial blessing, Federal Minister Leonore Gewessler set off the starting volley for the excavation works in the construction lot "H1 Sill Gorge-Pfons". This means that, along with four other construction lots along the BBT route, this lot is now also in full operation.

Federal Minister Leonore Gewessler: "The Brenner Base Tunnel is an extraordinarily important project. This tunnel between Austria and Italy represents the future of European mobility: fast, on rail and climate-friendly. The workers, who are digging in the mountains of lot H41, will contribute to the construction of this future perspective. This is a significant engineering feat and I am very proud, as tunnel patroness, to be able to wish anyone who contributes to this project courage and luck."

Pat Cox, European Scan-Med Corridor Coordinator: "I thank all those involved for their ongoing commitment to this large-scale project for the future, which is a symbol of what a peaceful, united Europe can accomplish".

BBT SE CEO: "This construction lot is of particular importance for the overall project, as from here large sections of the main tunnel southwards will be excavated using a TBM. Thus, today's is another important step for the realisation of the Brenner Base Tunnel."

CEO Judith Engel, ÖBB-Infrastruktur AG on the occasion of the ceremony: "The Brenner Base Tunnel connects the economy and people in Europe. It is an essential part of the European Scandinavian-Mediterranean Core Network Corridor. ÖBB encourages and supports the further project development and wishes all participants an accident-free and successful project implementation."

Christian Späth, Head Division Civil Engineering of Implenia AG: "Sustainability is increasingly becoming the focus of projects like this. ARGE H41 therefore decided to build the necessary precast concrete elements for the tunnel lining directly on the construction site. This saves about 27,000 truck journeys that would otherwise have been taken using the highway."

Governor of Tyrol Günther Platter: "The Brenner Base Tunnel is one of the great achievements of the European region Tyrol - Alto Adige - Trentino. I am convinced that the BBT will significantly contribute to relieve traffic and significantly improve cross-border mobility. The commuting time between Innsbruck and Bolzano will be only 40 minutes. The Brenner Base Tunnel is growing from day to day; in the meantime, 151 of the approximately 230 kilometres of tunnel have been excavated. Here, metre by metre, one of the largest rail infrastructure projects in Europe is being built underground. The BBT is therefore more than 'just a tunnel', it is the prerequisite for a modern, highly efficient and sustainable transport policy. Today, I would like to thank the many people on the construction site: miners, geologists, geotechnical engineers and surveyors, employees in the workshops on the construction site, planners, authorities and, last but not least, the people in the surrounding villages who have contributed to the broad acceptance of the Brenner Base Tunnel project. I wish all those involved in the project that the works may continue with no accidents."

Governor of the Autonomous Province of Bolzano Arno Kompatscher: "Today we celebrate this moment and are happy about the progress of the Brenner Base Tunnel project. It brings the region of Tyrol, which was separated at the time, back together and does so in a European spirit."

Construction of over 22 km of main tunnels
In total, approx. 22.5 km of main tunnel tubes and 38 cross passages with a total length of approx. 2.3 km will be excavated in this construction lot. In order to ensure the fastest progress possible in the whole project, the H41 "Sill Gorge-Pfons" lot was extended southwards by three kilometres of main tunnel tubes, where it meets construction lot H53 "Pfons-Brenner". The entire excavation of the exploratory tunnel in H41 has already been completed in a previous lot, so the geological conditions in this stretch are very well known.

Since mid-January 2022, the bidding consortium "H41 Sillschlucht-Pfons", which consists of the companies Implenia Österreich GmbH, Implenia Schweiz AG, Webuild S.p.A and csc costruzioni sa, has been carrying out the works on this lot. The works are expected to last until summer of 2028; the total bid amount offered by the bidding consortium is 651 million Euro. 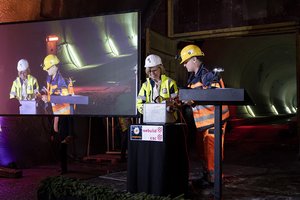 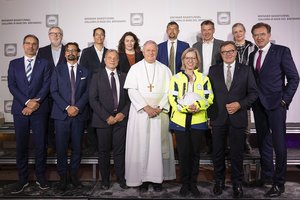 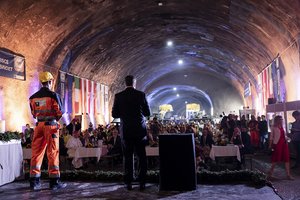