Works are in full swing in all BBT construction lots in Austria; 151 km of the 230 km long tunnel systems have already been excavated, which is nearly two thirds of the entire length.

On May 4, 2022 excavation works started in the H52 Hochstegen construction lot of the BBT. The ground-breaking ceremony took place on the Tyrolean side of the Wipp Valley and was presided over by tunnel patroness Maria Lorenzatto. The ceremony was attended by the vice-governor of Tyrol Josef Geisler, the mayor of Steinach Florian Riedl, the BBT SE supervisory board members Martin Ausserdorfer, Lamberto Cardia and Simon Lochmann as well as by Swietelsky Tunnelbau CEO Wolfgang Pacher and by BBT SE CEOs Martin Gradnitzer and Gilberto Cardola.

The construction lot contributes to driving the entire project forward quickly
The excavation works were launched with a blast in the eastern main tunnel southwards. The "Hochstegen H52" construction lot in the municipal district of Steinach am Brenner is a partial section of the former, redesigned Pfons-Brenner H51 construction lot.

"This new lot distribution with a separate tender process and the now launched H52 Hochstegen construction lot will permit us to continue with the tunnelling works of the entire project in a fast and efficient way. This construction section is characterized by very specific geological challenges", the CEOs and contractors of the project company BBT SE noted, highlighting the importance of this special construction lot during the ceremony.

Ambitious tunnel excavation due to geological challenges
The Hochstegen lot is located in a fault zone characterized by extremely complex geological conditions. The stretch is about 500 m long, with mainly water-bearing, carbonatic rock layers, meaning that the tunnel excavation in this stretch is particularly challenging. Swietelsky Tunnelbau GmbH & Co KG was tasked with carrying out the construction works in the H52 Hochstegen construction lot.

In February 2022, works started in the "H52 Hochstegen" construction lot with the set up of the construction site near Wolf. The Wolf lateral access tunnel is used as a main access and supply route. The core of the project is the excavation of the exploratory tunnel southwards through the geologically challenging stretch known as "Hochstegen" where excavation will take place with the protection of preliminary sealing and stabilisation injections. 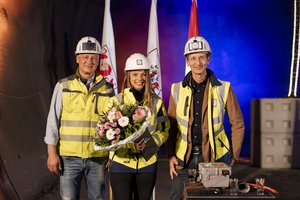 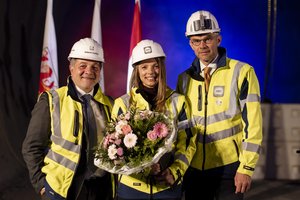 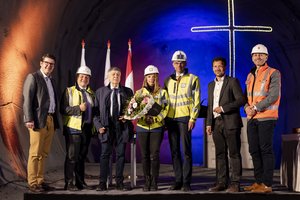