Sill Gorge: start of the excavation works at the future northern portal

On the 28th of October 2021, the symbolic start of excavation works was celebrated at the foot of the Viller Berg mountain in the heart of the Sill Gorge in Innsbruck.

To underline the importance of this step to connect the Brenner Base Tunnel to the Central Station in Innsbruck, the event was attended by the Deputy Governor of Tyrol Josef Geisler, the mayor of Innsbruck Georg Willi, his wife Katharina Willi as tunnel patroness, the abbot of the Wilten monastery, Giuseppe Romeo, representing the Italian railway company RFI, Christian Wieser and Gerfried Neurauter representing the Austrian railways (ÖBB), as well as BBT SE CEOs Martin Gradnitzer and Gilberto Cardola.

The excavation works started in the western main tunnel tube and will move southwards. The blessing of the construction works was given at the very spot where the future northern portal of the Brenner Base Tunnel will stand. Two 140-m long excavations southwards starting from the Sill Gorge construction lot will be driven for the route.

Josef Geisler, deputy Governor of Tyrol
"If we look at mobility and traffic conditions in Tyrol and beyond, it is high time to build sustainable infrastructures. Everybody talks about climate change, but we are actually taking action: together we are building the Brenner Base Tunnel, Europe's biggest mobility project."

Georg Willi, Mayor of Innsbruck
"Today we start a very important section of the biggest railway tunnel in the world, the stretch from Innsbruck southwards. At the end, thanks to the Brenner Base Tunnel, it will be possible to transport freight and passengers under the mountain in a smart way instead of using the difficult stretch up the mountain."

Gilberto Cardola, BBT CEO
"Compared to other construction sites of the Brenner Base Tunnel, the construction lot at the Sill Gorge is rather small but very important, as it is visible from Innsbruck and therefore visible to the people. As Europe's cross-border gate, once completed the BBT will ensure faster transport of passengers and freight from north to south and vice versa."

Martin Gradnitzer, BBT CEO
"Thanks to the construction of the BBT, two countries will be linked for the first time via an underground route, with the aim of transferring traffic from road to rail on the Brenner axis. We are now one step closer to our goal of implementing a working railway infrastructure to ensure mobility for future generations."

Northern and southern portal of the BBT
The start of excavation works at this spot is especially symbolic: the future northern portal here will be a visible entry and exit point, to and from the longest underground railway connection in the world. The breakthrough of the southern portal to the Brenner Base Tunnel near Fortezza already took place in December 2018.
Whereas there (once the BBT is operational) freight trains will transit as well, the northern portal will mainly be used by passenger trains, because freight trains can use the Innsbruck by-pass. After passing through the portals in Tyrol and Alto Adige, railway traffic between Innsbruck and Fortezza will run through the two single-track tubes of the BBT for 55 km.
Since the trains coming from Brenner run on the left, at a three-track entrance towards Innsbruck Central Station a switch occurs and trains are re-routed from left to right, so that passengers can get out at the platform as usual.

A collection of several structural elements
The main portal of the Brenner Base Tunnel, along with two new railway bridges and with the portal towards Innsbruck connecting to the Silltal tunnel at the foot of the Bergisel mountain, forms a collection of structural elements.
Everything was implemented with an eye to uniformity. The portals are designed so as to be inclined to the slope, and the approx. 50-m long and 9-m high steel trellis bridges span the Sill between them.
To ensure separate ventilation for both tunnel tubes, the western steel trellis bridge will be built in a closed configuration. A panoramic viewing area above the portal of the first tunnel at Bergisel constitutes a transition from the redesigned front part of the Sill Gorge with the existing and new transport infrastructures to the natural brook gorge in the rear part of the area.

Connection to the Central Station
BBT SE, in close cooperation with ÖBB Infra, had already completed the construction lot at Innsbruck Station in September 2009. A three-track entrance to adapt the southern end of the main station to the future configuration with the Brenner Base Tunnel was built and handed over to ÖBB.The works were carried out without interrupting railway operations. The new infrastructure is already being used during the construction phase of the BBT to supply parts for railway outfitting. 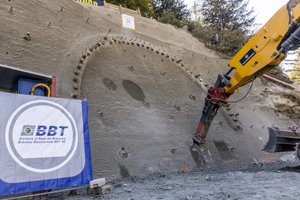 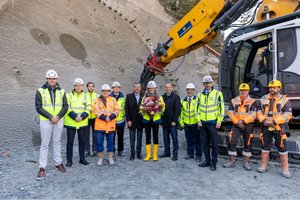 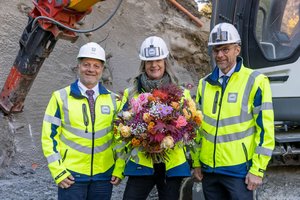 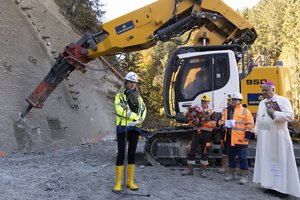