Opening of the three-track entrance to Innsbruck Central Station

The construction of the three-track entrance to  Innsbruck Central Station was carried out in close cooperation between BBT SE and ÖBB Infra. Since the works were to be carried out on ÖBB infrastructure, much of the work was done by ÖBB Infra. The works were carried out without interrupting railway operations. After three years of construction, the new three-track entrance to  Innsbruck Central Station was opened on Sept. 3rd 2019. Until the Brenner Base Tunnel becomes operational, ÖBB will use this stretch for traffic from the existing Brenner line.

ÖBB project team leader Peter Kölbach
„This project ties the historic Brenner railway and the railway line of tomorrow are thus linked together in the truest sense of the word. Thanks to the excellent close cooperation of everyone involved, these complex works were finished on time, without interrupting the heavy rail traffic along the Brenner line”.

BBT project manager Ewald Rass
„The Innsbruck central station construction lot (H11) is a small part of the project but it is an important milestone in the overall project of the Brenner Base Tunnel. The new infrastructure will be used, during the construction phase, to supply parts for railway outfitting. The big challenge in this lot was building while railway operations were ongoing, since railway operations could not be interrupted."

BBT SE CEO Konrad Bergmeister
“This stretch is an important link between the central station in Innsbruck and the next construction lot in the Sill gorge. We have excavated 109 km of tunnels. Now we must prepare for the railway outfitting phase.”

Construction lot data:
•    5 bridges/ Railway overpasses (reinforced concrete)
•    about 700 linear m Supporting walls (reinforced concrete) up to 8.25 m
•    about 665 linear m (about 2,100m²) of acoustic barriers
•    about 5,500 linear m of cable routes
•    about 3,300 linear m of new railway (about 7,600 linear m of track) including superstructure, substructure and drainage
•    about 8,200 t of track gravel, about 2,200 pieces of timber sleepers, about 3,200 pieces of concrete sleepers, about 23.5 km of low-voltage line
•    14 switches
•    About 6,600 m² of anti-vibration protective elements
•    Command and control tech, including 93 km of new cabling and 33 new signal boxes
•    About 23.5 km of low-voltage line
•    About 24.5 km of high-voltage line
•    Catenary with
o    About 120 catenary poles (including temporary construction)
o    About 10.5 km of catenary (including temporary construction)
o    About 2.9 km of return conductors
o    About 1,100 insulators
o    Distribution board, including the junctions to the Brenner Base Tunnel (The overhead contact line will be powered by the existing substations in Unterberg, Fritzens and Zirl via the new distribution boxes. The command and control of the entire structure is located at the command centre in Zirl)
o    Circuit breaker box with 66 remote-controlled switches for the overhead contact line 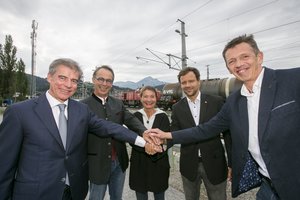 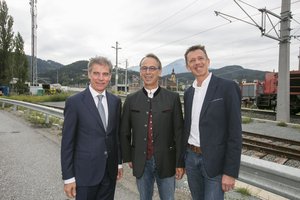 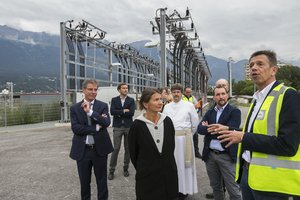 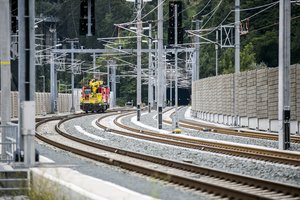 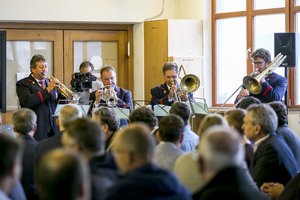 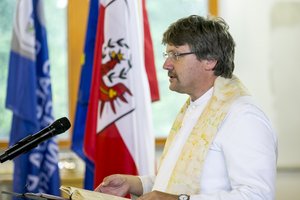