Guido Tonelli, discoverer of the Higgs boson, guest at BBT

An eminent guest was invited at the BBT Infopoint to relate his discovery, and to bring some light into a topic that is still full of mysteries: the birth and the future destiny of our Universe. We are talking about Professor Guido Tonelli, researcher at Cern in Geneva and Professor at Pisa University, an Italian and worldwide excellence of scientific research.

In a two hour-speech, Prof. Tonelli described the contents of his discoveries and their meaning in order to understand the birth and the development of the Universe. In 2011, at the end of an experiment involving over 10 years of intense work, Tonelli, the spokesperson of the CMS research group at Cern, announced the discovery, through the use of the impressive LHC accelerator (Large Hadron Collider), of the so called Higgs boson, a super-particle standing at the origins of our Universe. This particle may explain some of the still unsolved mysteries of Space, concerning both the expansion of the Universe in the very first stages of its existence and its destiny in billions of years. Moreover, it may be the key to discover and to illustrate the “black matter”, the existence of which has been deduced only by astronomical observations until now.

The speech was held during the 6th formative day for the staff of BBT SE. Other guests and institutional representatives took part at the speech of Professor Tonelli. 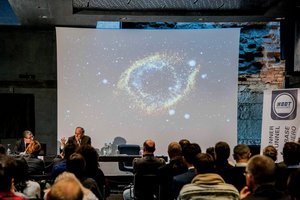 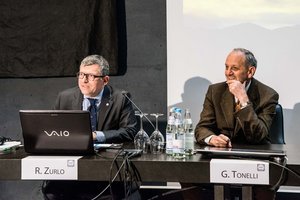