After 16.7 kilometres of TBM excavation, the link between the two construction lots Tulfes-Pfons and Pfons-Brennero is now complete.

36 kilometres of continuous tunnel have been built within the BBT system.

At 08.27 a.m., the tunnel boring machine “Günther”, excavating from the north, drilled through the last wall of rock southwards. So this “underground factory” drilled 16.7 km through the mountain, starting at Ahrental near Innsbruck. The breakthrough took place in the town of Steinach am Brenner. Prior to this, the tunnel tube from the Wipptal Valley was excavated with the drill&blast method over a length of 1.7 km in order to meet the stretch excavated by the TBM.

A statue of St.  Barbara, specially consecrated by bishop Hermann Glettler of Innsbruck, was given to the tunnellers through the newly created opening.

Thus, a pathbreaking milestone has been reached in this European infrastructural project in the heart of Tyrol: Now, the Brenner Base Tunnel is continuously connected and drivable for 36 kilometres, from Tulfes to St. Jodok/Schmirn.

An outstanding characteristic of the Brenner Base Tunnel project is the exploratory tunnel with a length of almost 17 km. It will be used for rock prospection and construction logistics and later on, during operations, for drainage and maintenance works.

Already in May 2017, this machine had hit the headlines.  For the first time ever, this machine excavated over 61 metres in quartz phyllite rock in just 24 hours. The average rate of advance was 11 metres per day.

Reactions to the breakthrough:

Pat Cox, European Commission, TEN-T Coordinator, SCAN-MED Corridor:
“Congratulations for the breakthrough with the tunnel boring machine, another important step and milestone for the Brenner Base Tunnel. After its completion, the BBT will non only connect Austria and Italy, but it will also be the core of the Scandinavian-Mediterranean corridor that stretches from Finland to Malta.”

Leonore Gewessler, Austrian Federal Minister for Climate Protection, Environment, Energy, Mobility, Innovation and Technology:
“Currently, 72% of all goods are transported on trucks.  This leads to 2.5 million truck journeys over the Brenner Pass. Therefore, the Brenner Base Tunnel will allow a modal shift from truck towards railway. This is not just good news for climate issues, but also implies a significant CO2 reduction for the Tyrolean population. Thanks to the Brenner Base Tunnel, the freight train transport rate will increase from 66 to 225 trains per day.”

Franz Bauer, CEO member of ÖBB Infrastruktur AG and member of the BBT SE supervisory board:
“With the Brenner Base Tunnel, we are creating an attractive and ecological mobility option on this very important European north-south axis, for our future generations.  That is why  the breakthrough of the exploratory tunnel means so much to us: it is a very special milestone for us and our biggest railway project in the world.  I would like to thank all the project supporters and in particular I would like to say thank you to all those dedicated people who are working day by day for progress of the project.”

Günther Platter, Governor of Tyrol:
“It makes me happy that the breakthrough was done by the TBM named ‘Günther”. Congratulations to the miners and the BBT SE executives.  This day is very important for Tyrol, for Austria and for all of Europe.  I am a big fan of this great infrastructural project. Especially the drilling world record of 61 metres and 4 cm in just 24 hours is a record we can be very proud of.”

Gilberto Cardola and Martin Gradnitzer, BBT SE CEOs:
“With this breakthrough we have made a huge step towards our goal, the construction of the world’s longest underground railway connection - a great achievement by everyone involved.

Thomas Birtel, head of the Board of Directors of STRABAG SE:”
The Brenner Base Tunnel is in many ways an extraordinary project:  Not only did we break the worldwide excavation record with 61.04 metres in 24 hours, but we also used the latest technological achievements such as track-free and self-guided service and supply trains.”

Thomas Stiegler, PORR AG CEO
“We are very proud to be part of this project of the century, the Brenner Base Tunnel, and to prove PORR’s expertise in underground construction, infrastructure and tunnelling.  The completion of the works in the northern exploratory tunnel and in the disassembly cavern is a very special milestone to us.” 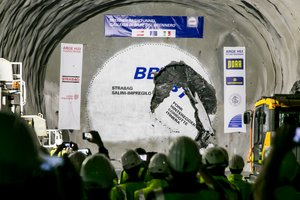 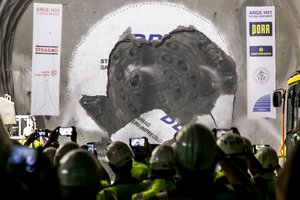 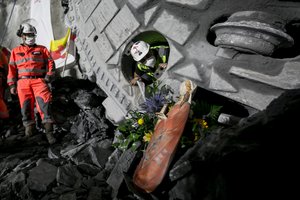 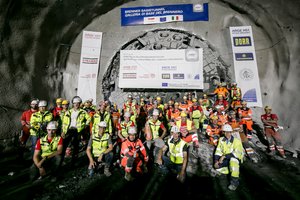 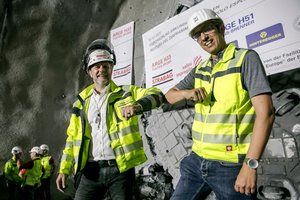 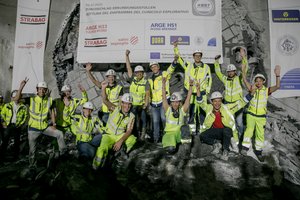 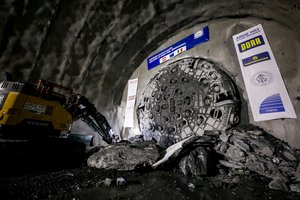 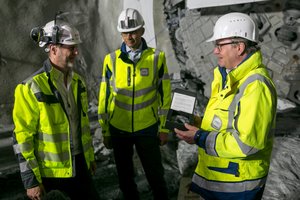