The Euregio walking stick passed through the brand new BBT Infocenter right at the start of its travels to Tyrol.

For the Year of the Museum, 2021, Euregio came up with something special. 80 walking sticks, known as Museumsstäkkkn, will be distributed to an equal number of participating houses. That’s an impressive number, for an original wooden symbol. One of these sticks is equipped with a GPS tracker which will trace its wanderings through this European region.

The motto of the Euregio project is „Anstäkkkn – Museum bewegt“, which is a pun on Stäkkkn, the traditional name for a walking stick and can be roughly translated as “Get moving - museums move people”, is meant to draw new perspectives from local history and tradition for transport, transit traffic and mobility in Tyrol, Alto Adige and Trentino. And the BBT exhibition in Steinach am Brenner fits this idea like a glove, as it provides lots of information on the biggest infrastructure project in the heart of Europe, the Brenner Base Tunnel.

Matthias Fink, Secretary General of the European region Tyrol-Alto Adige-Trentino, officially handed over the Euregio walking stick on July 28th to Martin Schneider, Director of the BBT Tunnel World, who promptly decorated it with a typical walking stick badge from Steinach am Brenner. The stick began its travels in Innsbruck and made its way from the Tiroler Volkskunstmuseum to Vigo di Ton in Trentino. Through Rovereto and then over the heavily travelled Brenner Pass, it arrived in the Wipp valley in Tyrol. Based on an initiative of the Passeier Museum, one can trace its current whereabouts with pictures of the handovers at any time HERE (https://2021.euregio.info/staekkkn/). 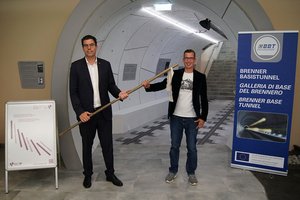 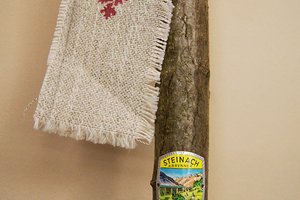