The northern part of the Sill Gorge has not been accessible since the start of construction works on the new lot last summer. In order to allow visitors to take advantage of the recreational area despite the construction works in this section, an almost 500 metre long alternative hiking trail has been set up and it is open and accessible starting now.

The path starts from the panoramic tour, coming from the parking lot of the Tirol Panorama Museum, and leads to a number of winding roads in the Sill Gorge. When tracing the route, great attention was paid to making the alternative trail as nature-friendly as possible as well as connecting it to the existing trail network. BBT SE worked together with the Forestry Department in Innsbruck to design and implement the path project.

Deputy Mayor Johannes Anzengruber was glad to hear that the front section of the Sill Gorge is now again accessible to visitors looking to relax and that the path construction works have been carried out in an environmentally conscious way: "During construction, it was possible to avoid all actions in the existing wooded areas and to adapt the works to the natural profile of the territory. This also meant that no additional logging was necessary". Anzengruber thanked BBT SE for the good cooperation and praised the contracted construction company as well for the attentive work on the path design.

"The new path is now to be considered a safe alternative in the front section of the Sill Gorge. Visitors don't have to try and stroll through the construction site anymore," so BBT project manager Martin Keinprecht, who goes on to add that "the alternative trail is only a temporary solution and will be dismantled on completion of the construction works of the Sill Gorge section". 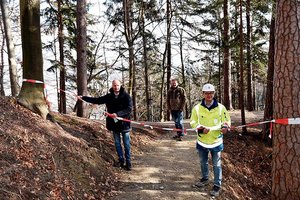 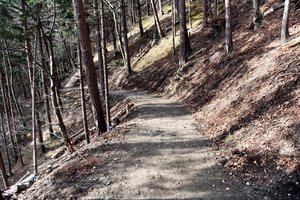