Brenner Base Tunnel: Breakthrough of first main tunnel below the Isarco river

About one month after construction works started, the excavation works for the first main tunnel below the riverbed of the Isarco river for the future Brenner Base Tunnel railway traffic were completed today. The excavation works for the west main tunnel below the Isarco river started on 22nd March and are about 57 metres long. Excavation below the river was only possible after freezing the soil with liquid nitrogen and then maintaining low temperatures by circulating brine. With the ground freezing technique a frozen shell is created around the tunnel perimeter, which allows safe excavation works to take place below the river without having to re-route the bed of the river under which the Brenner Base Tunnel runs. This reduces the environmental impact on the fish fauna and flora of the Isarco river.Before the start of the excavation and until the final lining is in place, it is necessary to monitor soil temperatures on a daily basis in order to check the status of the frozen shell using special "thermometers" placed inside the ground, as well as to verify there is no water inflow inside the tunnel.

Once the soil has been consolidated, works are carried out with the usual excavation methods, in this case with a percussion hammer, which breaks up the soil reaching an average daily production of about 1.5 metres. After the excavation works have been completed, the following step is the final concrete lining of the tunnel. One of the tunnels has already been excavated with this soil consolidation method throughout 2020 and two other tunnels are yet to be excavated.According to Matteo Stelitano, geologist at the Isarco Underpass construction site: "A very important goal was achieved with the first main tunnel breakthrough, which is a testament to the excellent work that has been done by BBT SE, the Contractor and the Construction Management, as well as to the common goal of completing the work. Personally, I am honoured to have the possibility to follow these activities up close. For me, it is also a definite opportunity for professional growth." 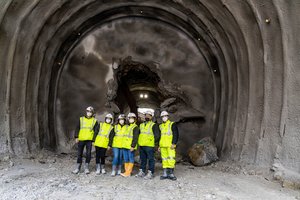 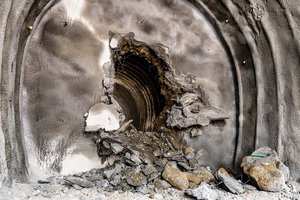