Cooperation with Universities and secondary schools

Starting in 2009, BBT SE signed several cooperation agreements with universities and research institutions, including Bochum, Munich, Vienna, Leoben, Innsbruck, Bolzano, Trento, Verona, Padova, Milano, Bologna, and Rome.
As part of these agreements, many students or new graduates have taken an internship at BBT SE for periods varying from 4 weeks to 12 months. Over 30 theses, masters’ theses and two doctoral works have been written on several aspects concerning the Brenner Base Tunnel.

The main topics of these cooperative efforts have been:
• the re-use of spoil for the production of concrete;
• the development of a digital system to reduce over-excavation;
• the numeric simulation of the behaviour of the rock mass;
• the optimization of support structures;
• the development of high-resistance concrete (to fire, to abrasion, to chemical attack, etc.);
• project management.

Recently, the Politecnico in Bari and the University of Cagliari have signed an agreement with BBT SE on training and orientation internships which will hopefullyattract university students to the project. Pursuant to Law 107/2015, which aims to reform certain aspects of the school system and has made school-work rotations obligatory, BBT SE has started an intensive cooperation with the secondary schools in Alto Adige, which regularly ask that final-year students be hosted for training internships in companies. In 2016, therefore, BBT SE started a programme to promote and inform the secondary schools in the Project area.

The main tasks carried out as part of the student’s internships concerned:
• as regards administrative internships, support to the financial and budget dept. and in contracts and digital filing, etc.;
• as regards technical internships, assistance in carrying out topographic measurements, monitoring and measurements at the rock face, use of technical design software, etc.

As part of this, by the end of 2016 BBT SE will have hosted 12 students working in various fields, who will benefit from the opportunity offered by the Brenner Base Tunnel Project to have a first, intense contact with the professional world. At present, about 10 schools have been involved (technical institutes, topographic and surveying schools etc.) 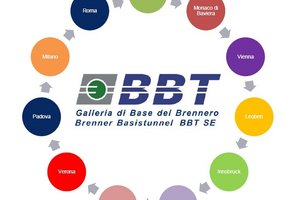