Brenner Base Tunnel - on the anniversary of the signing of the State Treaty, 100 km have been completed

Brenner Base Tunnel - 15 years ago, the State Treaty was signed, starting the planning and subsequently the works for the project

On April 30th, 2004, the State Treaty was signed in Vienna and at the end of 2004 BBT SE was established as a project vehicle to start the planning phase and then carry out the works.

The Brenner Base Tunnel is actually a tunnel system made up of a total of about 230 km of tunnels. The first excavation works began in 2007 and according to the construction programme, the works should be completed in 2027 and operations should start in 2028.

The State Treaty provided that Italy and Austria will bear in equal measure the costs of building the tunnel (total costs 8.384 billion Euro). The support of the European Union is extremely important; with steady increases in the percentage of co-financing, the EU has always contributed to the project and is its most important source of funding. The EU considers the Brenner Base Tunnel one of the most important projects in Europe. The European co-funding varies from 40% to 50% of sustained costs and these percentages are expected to increase in the future.

This is a further incentive for BBT SE to continue working with all the stakeholders and contractors to complete this long-awaited project within the foreseen timetable and budget. As the EU Commissioner for Transport, Violeta Bulc, has said, the Brenner Base Tunnel project is a flagship project that will not only bring the European States closer, but make these linked economies more efficient and competitive.

With the occasion of this important anniversary and this important 100-km milestone, BBT SE reminds you that our construction sites are open to the public twice a year. This year, the Open Tunnel Days will take place in Mules (Italy) on June 2nd and in Ahrental (Austria) on September 15th. 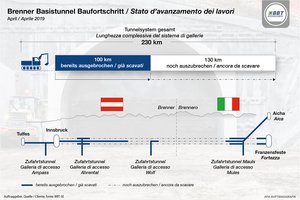