April 18th 2017 was the bid presentation deadline for the largest construction lot for the Brenner Base Tunnel, Pfons-Brenner.

The construction lot includes the excavation of the main tunnels between Pfons and Brenner, about 9 km of exploratory tunnel and the emergency stop and the cross-over at St. Jodok. In total, about 50 km of tunnel will be driven.

This construction lot was tendered at a European level according to the MEAT principle and on the basis of Austrian tender law (BVergG 2006, as amended in 2016). Five bids were tendered, from the following bidder consortia:

The qualitative criteria are currently under evaluation. Once this phase is complete, the price bids will be opened in a public hearing.

The Austrian CEO of BBT SE, Prof. Konrad Bergmeister, considers this tender procedure as a further important milestone for the construction of the Brenner Base Tunnel, since over 80% of the works for the tunnel have now been tendered. Six years ago, on April 18th 2011, Phase III - the construction phase of the tunnel - was launched.

So far 61 km of tunnel have been driven, which is about a fourth of the total volume of excavations. 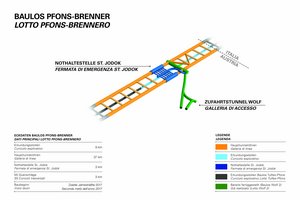