The Brenner Base Tunnel Company (BBT SE) awards the contract for the H52 "Hochstegen" lot in Steinach am Brenner to Swietelsky Tunnelbau GmbH & Co KG.

Work will begin as early as the first months of 2022. The contract for the execution of the construction works on this particularly complex lot was awarded on 15th November 2021. Construction works will be completed within 23 months.

The bid amount offered is EUR 102 million. The tender was carried out at European level according to the MEAT approach (Most Economically Advantageous Tender). The contract was awarded following a careful and formal review as well as an evaluation of the bids for the Hochstegen construction lot submitted by construction companies. The Swietelsky company has already carried out the work for the Wolf II preliminary lot for the Brenner Base Tunnel (which was completed between 2013 and 2017).

Hochstegen: a complex geological area
The new Hochstegen construction lot is located in a fault zone area characterised by extremely complex geological conditions. For a stretch of approximately 500 metres, aquifer layers of carbonate rock are the key component here. For this reason, tunnel excavation work is especially demanding in this area.

A total of approximately 2.6 km of main tunnels towards the Brenner will be excavated as well as 0.6 km of interconnecting tunnels, five cross-passages and 1.2 km of exploratory tunnel southwards. Work to complete the crossover point (2.5 km) at the southern Wolf hub is also planned. However, the main focus of the construction lot is the excavation of the exploratory tunnel southwards through the so-called Hochstegen formation. This is carried out in the area under the protection of waterproofing injections and stabilisation taking place during the excavation progress.

Current status of the excavation works: 148 of the 230 kilometres of tunnel have already been completed. Of these, 53 kilometres are for the railway tunnel, 54 kilometres for the exploratory tunnel and 41 kilometres for other works. 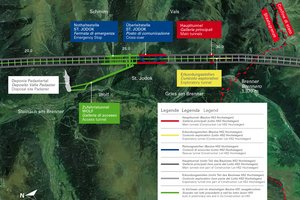