On 11th February 2022, a new vehicle for the chief of operations was officially presented and put into service at the Innsbruck-Land district office in Schönberg.

The ambulance will also be stationed there in the future.

Once again, BBT SE is working closely with the Red Cross. "Cooperation with the emergency response organisations has been very important for the Brenner Base Tunnel company since the project was launched. Safety and, if necessary, quick, efficient assistance for all employees on the construction lots are top priority issues,” so BBT SE Safety director Erwin Reichel.

In equipping the vehicle, the requirements for operations on the Brenner Base Tunnel building sites were taken into special consideration. "Long operational times due to long distances and complicated rescue procedures as well as the logistical challenges that make it difficult to resupply materials were all taken into account", explains district rescue commander Günter Obojes.

“When tunnel construction work began, the Red Cross and BBT SE signed a contract to ensure optimal medical assistance in case of emergency. This vehicle is a further part of that, based on past experiences” is pleased to say BBT project manager in the Pfons-Brenner stretch, Michael Knapp.

The plan is to use the new vehicle especially for operations in the Wolf / Steinach am Brenner project area. The financing was provided jointly by the Tyrolean Red Cross (Rote Kreuz Tirol gemeinnützige Rettungsdienst GMBH) and BBT SE. BBT SE covered the costs for the additional equipment required for optimal emergency intervention on building sites. 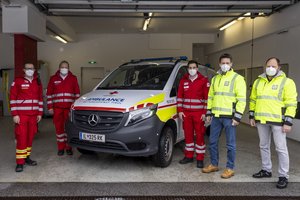 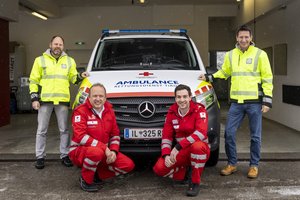