Using the BBT fund for compensation measures, the Provincial Dept. for mountain stream control and avalanche barrier construction was able to widen the bed of the Isarco river and make several environmental improvements.

Protection of the drainage basin

After the severe storms and flooding that took place in 2012, causing significant damage and claiming two lives in the towns of Vipiteno/Sterzing and in Vizze/Pfitsch, every effort was made to protect the drainage basin areas from further flooding. As part of extensive engineering works, the bed of the Isarco river was widened up to 16 m in the area of Prati/Wiesen, between the industrial craftsman zone and the mouth of the Mareiter brook. The markedly larger riverbed and the vertical side walls should protect the neighbouring residents from flooding in the future.

4. 5 million Euro of BBT compensation measure funding for the improvement of the Isarco river

The works to widen and improve the Isarco river involve a total of 3 construction lots; the first lot, and the second which was just completed, were both financed by the BBT fund for compensation measures for 1.5 million Euro each. The third lot of this project is already being carried out and should be completed by 2021. In total, 4.5 million Euro of BBT compensation funding has been made available for the widening and improvement of the Isarco river in the drainage basin areas of the towns of Vipiteno/Sterzing and in Vizze/Pfitsch.

BBT SE also made available a further amount of 2 million Euro to the Provincial Dept. for hydraulic engineering as part of BBT compensation measures. These funds will cover additional measures for the re-vegetation and improvement of watercourses within the project area of the Brenner Base Tunnel. 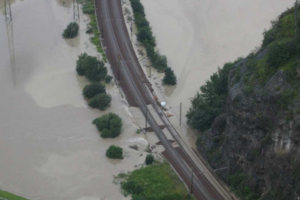