Breakthrough in the Tulfes–Pfons section

On February 12th, 2019, the last breakthrough by blasting took place in the Tulfes-Pfons section. On that occasion, a small ceremony was held for the miners and workers, the representatives of the construction consortium, the local construction supervisors and the BBT SE.

The works in the Tulfes-Pfons section began in summer 2014.  Mechanical excavation in the exploratory tunnel continues southwards with the tunnel boring machine.  If works proceed on schedule, the excavation of the exploratory tunnel will be concluded in August 2019, with the dismantling of the tunnel boring machine and a vacated construction site by the end of November 2019.

In the construction lot Tulfes - Pfons, 42 tunnel kilometres will be driven, 15 kilometres of which in the exploratory tunnel from Ahrental towards Pfons using mechanical excavation.

A 3.5-kilometre tunnel  and a 2-kilometre tunnel connect the Brenner Base Tunnel with the Innsbruck by-pass. A 9 km long emergency tunnel was realised parallel to the Innsbruck railway by-pass in order to conform to the latest safety requirements and to  allow not only freight traffic but also passenger traffic to travel from the lower Inn Valley to the Brenner Pass on the  railway line. 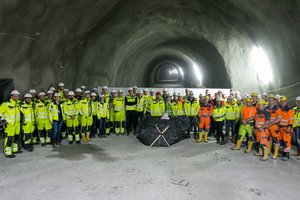 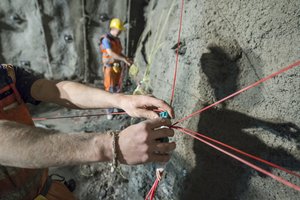 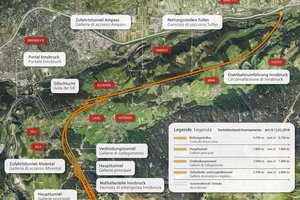