34,000 visitors at the Brenner Base Tunnel World

Since 2016, the BBT Infocenter in Steinach am Brenner has offered an overview of the largest tunnel project in Europe. An adventure and a world of knowledge for young and old, for newcomers to the projects and experts alike.

Tunnel World opened in Steinach am Brenner in April of 2016. About 34,000 visitors have come since then to find out about the construction of what will be the longest underground railway tunnel in the world.

In 2017 there were 19,000 visitors. The 800 m² exhibition showcases, among others, topics such as tunnel construction, geology, the history of the Brenner Pass, natural resources and the environment. Tunnel World is also the starting point for construction site tours. Technicians, people living nearby, students, tourists, school classes and families have all mentioned their positive impression of the facility.

In Alto Adige, as well, there is an information centre on the Brenner Base Tunnel. The exhibition in the BBT Infopoint at the fortress in Fortezza received about 13,000 visitors last year.

Cooperation between the Wipp valley tourism board and Tunnel World

According to tourist operators in the Wipp valley, the Infocenter is an important stimulus for the tourism sector. Tunnel World is managed jointly by the Wipp valley tourism board and the project vehicle BBT SE.

„The positive cooperation between the BBT Infocenter Tunnel World and the Wipp valley tourism board is good for the entire region“, said BBT SE CEO, Prof. Konrad Bergmeister, delighted about the high numbers of visitors. „In ten years we mean to have completed tunnel construction and by shifting heavy traffic from road to rail, the quality of life in the region along the Brenner Corridor will certainly improve. We will continue to involve the population in the Brenner Base Tunnel project during the construction phase”, Bergmeister continued.

According to the the president of the tourism board, Kurt Hasenbacher, the Infocentre has become an invaluable part of the tourism economy in the Wipp valley: „From our point of view, Tunnel World and the connected structures also play an important role as bad-weather fallback plans for day trippers, people on longer vacations and tourist groups.”

The tunnel exhibition is structured on two levels and includes a display tunnel, many interactive exhibits that encourage hands-on discovery and a separate section for visitors with technical knowledge. Videos show the individual phases of the progress of the works. The main point behind the Infocenter is to show visitors the complex topic of tunnel construction from many different sides.

The Infocenter is right in front of the Bergeralm cable car valley station. Entrance is free of charge. Tunnel World is open from Tuesday to Sunday from 10 Am to 5 PM.
www.tunnelwelten.com/ 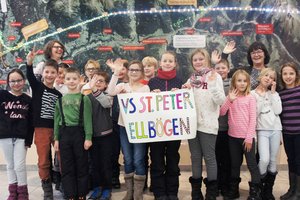